Hello! Recently I've been making a few larger suggestions relating to what most consider to be large issues, my last one being about the economy. Here, I'm going to suggest another system that will tackle 3 issues, the massive amounts of money in the economy, the lack of community projects/interaction (while some not see this as an issue I do), and set homes.

(While this suggestion is pretty simple there are a few extra things that don't really need to be implemented but would be nice. so I'm splitting this into 2 parts. )

Main Suggestion
Basically, everyone contributes money to something that will benefit them all. I call it a roadmap because you cant contribute to the later things without getting the starting ones first. 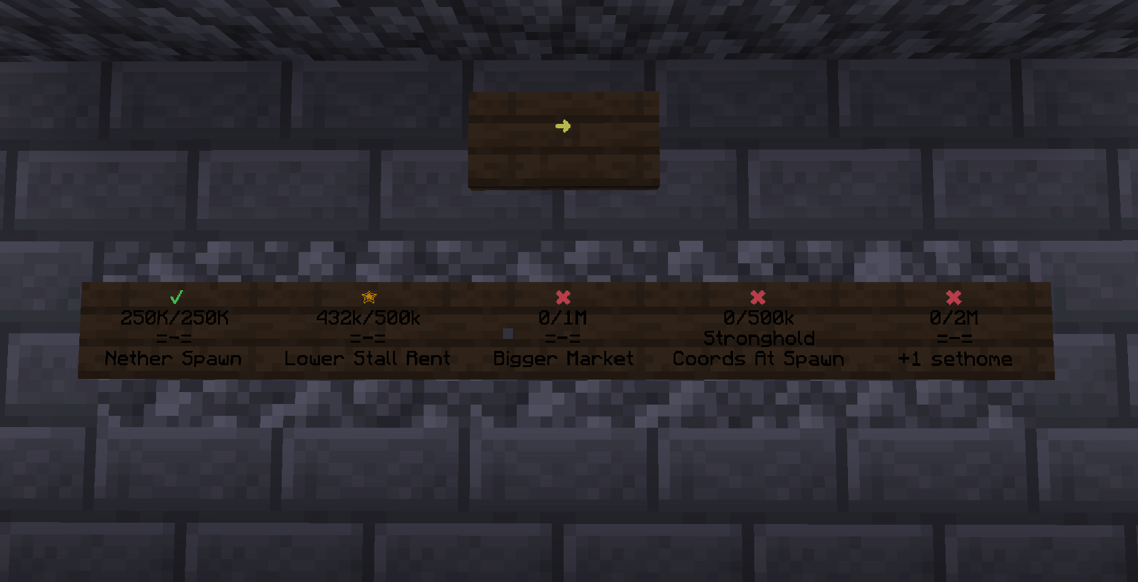 The check mark shows its completed, and would eventually get added. The star means its in progress, and the X's mean they have no contributions and currently cannot be unlocked. The reward/end goals are examples, but I think would fit in quite well. This would remove a lot of money from the economy and promote people working together.

Extra Stuff
First thing I'd like to discuss here is the possible encouragement of massive AFK farms just to get the perks from this, possible solution to this would be to add a limit on how much you can donate to each item. (could increase with rank, its not very p2w)
Second thing is how the rewards like "+1 sethome" would work, id personally like everyone on the server to have it, but if its decided only people who contribute to it get it, a few possible issues arise. one is people just contributing 1$, possible solution is only do the top x% contributors. Another is people hogging the spaces with alts, which could just be made bannable.
Another thing id like to see with this is chat messages when someone contributes a large sum, maybe over 10% of what's needed?

(concept message)
I also think you should be able to be uprepped if you contribute this much, as you're helping the entire server
to go alongside the previous mini suggestion, a lecturn with the top contributors should be placed near the roadmap.

This is an amazing suggestion
O

Great idea I hope an admin or mod responds to this.

contact MisterEpic and ask if this can be added

i need this
O